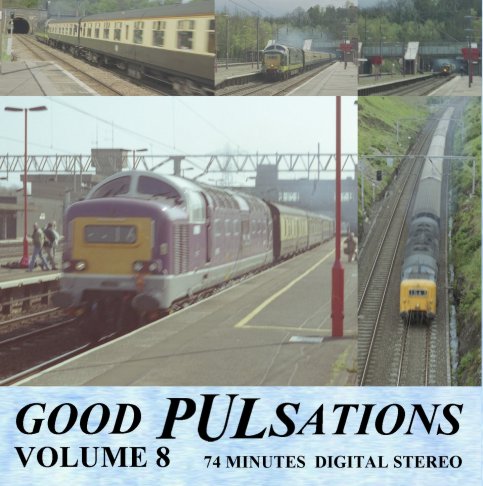 Deltics on the main line, heard from both front and rear cabs, on-train, and atmospheric lineside recordings.

You can download a pdf version of the playlist:
Good Pulsations Volume 8 playlist PDF

1* - Both engines are fired up at London Liverpool Street.
2* - We depart Liverpool Street on the 1030 to Norwich.
3* - Shortly after departing Liverpool Street, D9000 is opened up. From a window on the right-hand side, the rear engine can be heard clearly as its revs rise and fall.
4* - A hasty standing start from Stowmarket at 1200hrs.
5* - We set off from Norwich at 1406. As we rumble over the bridge, someone standing on a moving boat gives a wave of his fist as he gets his photo of the Deltic! D9000 passes a few level crossings and continues to power up the long climb. With a front window to record from, great acoustics and a loco droning away nicely, I've published the full 9 minute recording up to the line speed being reached.
6* - Another brisk departure from Stowmarket at 1442 as we head back south. 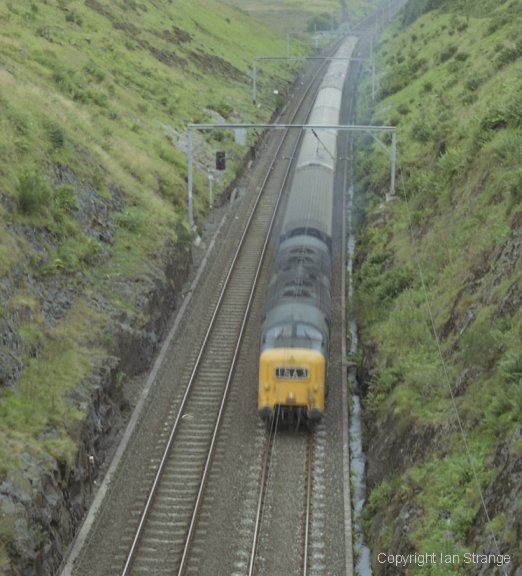 7 - Near the summit at Shap, recorded high up on a footbridge, Deltic 19 battles up the gradient before passing directly under the microphone at 1334 (12th August 2000).
8 - The location is Welton, south-east of Rugby. At dusk, the silhouette of 55019 is seen running passed along an embankment with a generator car whistling at the rear of the train. It is returning to Liverpool from Waterloo (21st August 2000).
9 - Long Lawford, north-west of Rugby. It is a starry night and 55019 can be heard pulling away from Rugby about 1 mile away. A class 66 passes by light-engine then the Deltic opens up to full power and roars passed on its way back to Manchester from Waterloo with 50017 dead-in-tow at the rear (28th September 2000).
10 - Just after night-fall at Crewe. As an electric service arrives from the south, 55019's horns are heard as it arrives at platform 5 with the ECS after the final Deltic hauled Northern Belle working (6th October 2000).
11 - A few minutes after the previous recording, no.19 pulls out of the station (a pity about the poorly sounding horns!). (6th October 2000).

Sounds from the rear cab of D9000 during its 1999 Ramsgate workings for Virgin Trains:

12* - Northbound departure from Coventry recorded from the rear driver's seat (26th June 1999).
13* - A few minutes after the previous recording, we pass through Beechwood tunnel before getting up to 100mph. (26th June 1999).
14* - Heard from the rear 2nd man's seat, we depart Oxford, ease over the pointwork and then gradually open up to full power, the rear engine being very audible as it picks up. We accelerate up to the 90mph line speed. By the time of this cab-ride, I had got the hang of capturing the best rear-cab sounds! Therefore, I've published the full length recording as this loco sings away beautifully. With the high cab position, the passing of low bridges gives a great sensation of speed. (7th August 1999).
15* - On the penultimate Ramsgate run for D9000, we arrive at Birmingham N.S. As we emerge from the tunnel into the station, our driver gives a quick rev up. (18th September 1999). 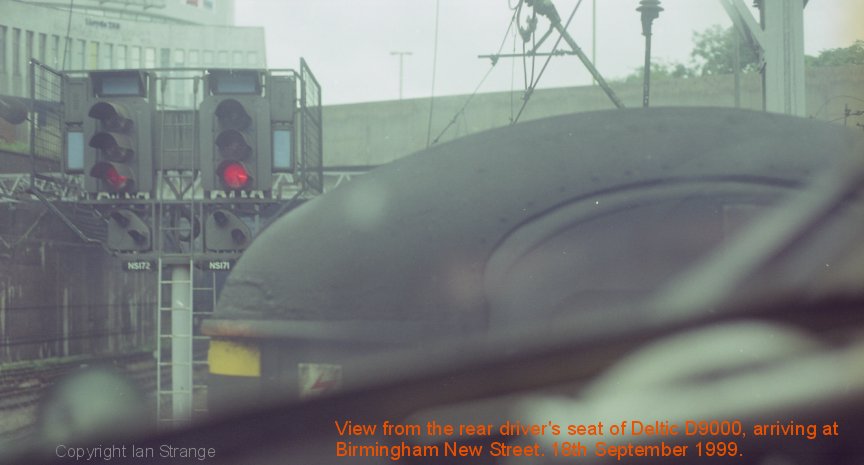 16 - After a lengthy delay, D9000 departs Leicester on its way to Lincoln on a Fragonset railtour at 1128. The thrust from the leading engine's exhaust blasts a large quantity of loose rust from Swain Street bridge! (9th December 2000).
17 - Between the two tunnels at Hadley Wood, D9000 roars through at 1419 as it returns from Kings Cross to Crewe on a Pathfinder tour (see the 3 inset photos across top of front cover)(28th April 2001). 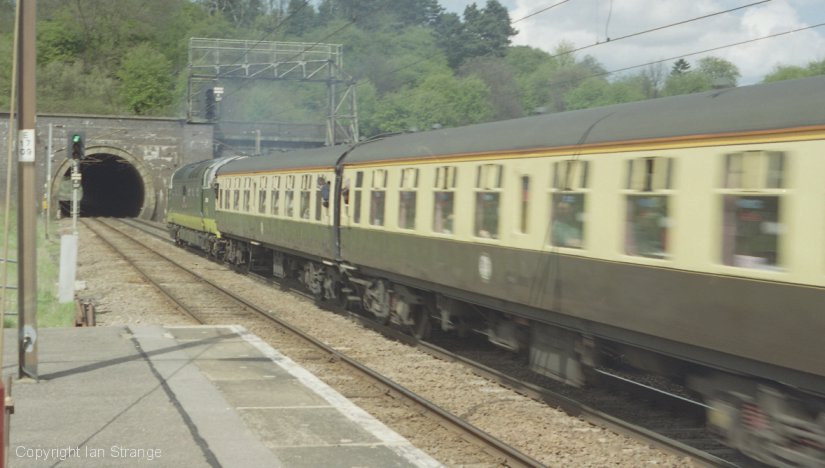 18 - A DPS railtour passes through March at 1136 behind D9009. The Deltic then rounds a right-hand curve as its rear engine opens up and it roars away into the distance. 55019 was dead in tow at the rear of the train (20th October 2001).
19 - The location is Maxey level crossing, 6 miles north of Peterborough. At dusk, there is a bright red sky to the west, and dark shower clouds across the south. Quail can be heard swooping low over the fields. Meanwhile, 55019/D9009 ease passed the junction along the down-slow at 1832 and 55019 opens up to full power and accelerates from about 25 to 60 mph. Sadly, Deltic 9 does not join in! No.19's rear engine eases off soon after passing by. A Hull Trains class 170 passes on an up service. The Deltics slow for a signal stop at Tallington (20th October 2001).
20 - Burton Coggles on a very wet and windy morning. D9000 heads passed exactly on schedule at 1006hrs (on the fast-line) on its way to York. A north-westerly wind carries the sound as the Deltic powers up the bank towards Stoke Summit. A late running class 91 heads by in pursuit, just as the Deltic enters Stoke Tunnel. It can be heard again after emerging. Bird-scarers fire off in the distance and echo as the rain gets heavier (1st December 2001).
21 - After dark at Doncaster as D9000 tears through along the centre road at 1822 on the Steamy Affairs railtour returning from York to Ashford (1st December 2001).

24* - After some delay, the historic moment arrives as we depart Crewe at 0810 in bright sunshine.
25* - A couple of minutes after leaving Crewe, no.16 opens up and accelerates towards Kidsgrove. With its unusually loud air-intakes droning away happily and very little wheel noise from the mark 1 coach, I decided to publish most of this lengthy (almost 7 minutes) recording. The trackwork alternates between jointed and welded.
26* - We depart from Kidsgrove at 0826, no.16's wheels slipping on the moist rails bringing us to a stop, before pulling away successfully.
27 - Back at Crewe at 2310hrs as a class 37 stands in the background, no.16 propels the ECS out of platform 12 with one last triumpant roar!


Return to the Railway CDs page