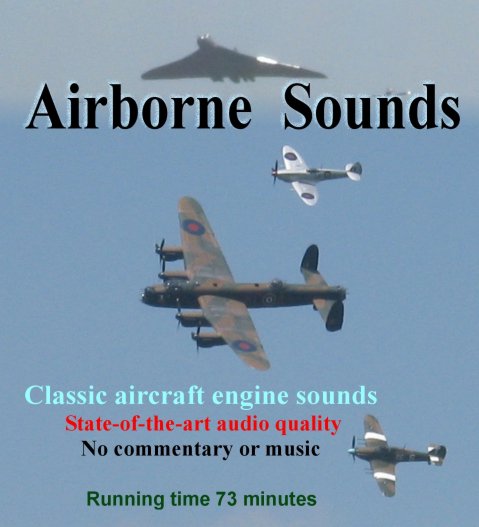 Sounds of classic aircraft engines. No commentary. No music.

Entirely recorded on state-of-the-art kit, which picks up the ground vibrations as well as every audio detail and the full atmosphere of the surroundings.

So... bolt your furniture to the floor, and enjoy!

Spitfire starting up; Vulcan doing a spiral ascent; Lancaster and Tornado in formation; floor-shaking rumble of a B-17; Lancaster, Hurricane and Spitfire display at close quarters.

You can download a pdf version of the playlist:
Airborne Sounds playlist PDF

Lancaster, Hurricane and Spitfire circle around.

2 - Another low fly-pass, this time a Hawker Hurricane (a small boy heard saying "It's a Spitfire", was incorrect!). Cosby Victory Show.

3 - a) The Battle of Britain Memorial Flight's (BBMF) Lancaster, Hurricane and Spitfire performing their display at Cosford. The Lancaster passes closely, with the two fighters in the background.
b) The BBMF trio gradually get back into formation. The Lancaster passes almost over-head, and the fighters pass in hot pursuit - one of them backfiring loudly (see photo below). After turning in the distance, they pass very closely in formation and head off towards Welshpool's airshow.

6 - a) RAF The Battle of Britain Memorial Flight's Dakota swoops around Cosford, making that familiar twin-engine sound. b) The Dakota circles around again.

7 - a) B-17 ‘Sally B’ produces a lovely, lazy rumble from its four engines. Cosford.
b) The B-17 continues its display. It is not as loud as a Lancaster, but you can feel the vibrations in the ground!

8 - An RAF Tucano makes a fast and low approach to Cosford from the west, with a high-pitched whine from its single gas-turbine engine.

13 - A P51 Mustang performs a display, whistling as it builds up speed. Cosby.

14 - The Mustang continues its display. Cosby.

15 - The Mustang continues its display. Cosby.

18 - Hurricane R4118 continues its display with gunfire in the background. Cosby.

20 - The B17 arrives at Cosby and circles around. A vintage threshing machine can be heard running in the background. Cosby.

22 - The B17 still rumbling as machine-guns fire in the distance! Cosby.

23 - The YAK 11 taxis and parks, turns through 180 degrees and blasts a few spectators with its back-draft! Cosby.

24 - (ed) A Tucano takes off promptly followed by Vulcan XH558 also taking off, and doing its characteristic roll turn to the right over-head (see photo below). The Vulcan gives a couple more ground-shaking roars. Waddington.

25 - A Typhoon jet-fighter makes an unbelievable racket as it performs a high-speed display at Waddington. This recording picks up the full range of its sound qualities including the sub-bass vibrations.

26 - a) Vulcan XH558 approaches Cosford from the west in formation with 2 light aircraft.
b) After the light aircraft had left, the Vulcan sweeps passed after a brief howl and then circles around again.
c) The Vulcan gets into position over the airfield area, and then makes a spiral ascent. Despite being a mile away, it still shakes up the ground! It quietly does a spiral descent, and then sweeps passed quite closely, before drifting back over the runway and making a final climb as it departs eastwards.

28 - Lancaster, Hurricane and Spitfire in formation, pass behind the microphone and circle to the left until in front, turning through about 200 degrees (see front cover main photo). They then straighten up and fly over the runway.

29 -(ed) Hurricane and Spitfire in formation, depart the airshow.

30 - Lancaster and Tornado in formation cruise gently passed, before the Tornado peels off to the right and roars off behind the microphone, tearing the air apart!

(ed) denotes recording edited down from a longer original.

Recordings, cover designs and photos are copyright of Ian Strange (2014).

For best results, listen to these recordings on a home stereo system in a quiet room. That way you can feel the floor and furniture vibrate! Also, avoid using headphones for the jet aircraft, as these may harm your hearing.

Return to the Aircraft CDs page.