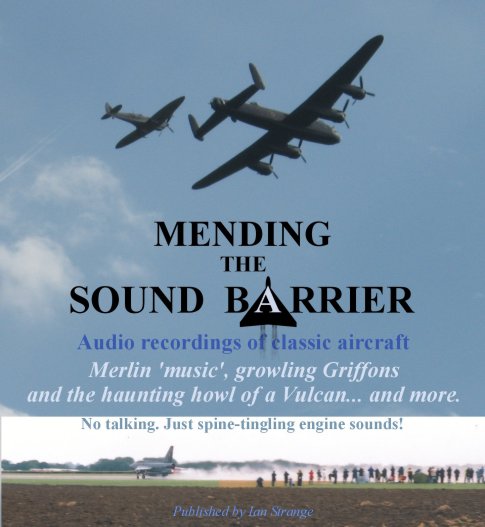 From the smooth roar of Merlin engines, to the awesome howl of a Vulcan that almost removes one's living room wall plaster!!!

Amazing sounds of a Mosquito, Hurricane, Spitfires, Lancaster, P51 Mustangs, plus the growl of a Shackleton, and the howl of a Vulcan.

Also blasts down a runway by an EE Lightning, a Victor and a Comet airliner. Plus a Shackleton having 3 of its engines fired up from cold.

NO TALKING!!! As with all my transport titles, I fill my CDs with engine sounds.

You can download a pdf version of the playlist:
Mending the Sound Barrier playlist PDF

2 - a) The Battle of Britain Memorial Flight at Leicester Airshow 1990, heard from the village of Little Stretton. The hurricane and Spitfire are both heard performing their display.
- b) The fighters are heard in the background as the Lancaster rumbles by followed by each fighter.
- c) The Lancaster passes pursued by the Hurricane and Spitfire as they get back into formation.
- d) The BBMF trio make one final fly-passed. 26-8-90.
3 - Still at the above show, Vulcan XH558 roars and howls over the Leicestershire countryside.

4 - During the 1982 Leicester Airshow, Shackleton WL756 deputised for the Lancaster. Heard from Oadby, the growl and deep roar of 4 Griffon engines heralds the approach of the Shackleton. Then it turns sharply to starboard through about 120 degrees, throttles back, and rumbles into the distance with a sound frequency almost below hearing range. 29-8-82. PMONO

5 - a) A Hurricane and Spitfire (BBMF, Lancaster unavailable) arrive at the 1991 Leicester Airshow.
- b) The recording location, in a slight valley east of the runway, provides excellent acoustics as the two Merlin engined fighters continue their display.
- c) The Hurricane and Spitfire are heard in the distance, then they each swing around and approach the mic from opposite directions passing each-other not far away, then continue their display. Finally they get back into formation for a final fly-passed.

6 - Still at the 1991 show, a Spitfire, having taken off from Stoughton Airfield, puts on a lively display.

13 - 25th August 1996. A P51 Mustang performs its display over Oadby during that year’s Leicester Airshow.

14 - a) A chilly afternoon at Airbase, Coventry, 28th January 2012, with the airport fire-engine idling in the background. Shackleton WR963 has its no.3 engine started up from cold. Almost 2 minutes later, no.4 engine springs to life. Attempts are made to start no.1 engine straight away, almost inaudible except when firing briefly twice and stalling. The grumpy old Griffon finally awakes after a further 3 minutes. No.2 engine was awaiting the refitting of its propellers.
- b) No.3 engine is revved up, followed by no.4 engine.
- c) No. 1 engine revs up, then 2 engines are shut down, followed by the last one. SOTA
15 - During a Severn Valley Railway WW2 event, 2nd July 2011. A steam engine stands in the background at Kidderminster, as a Lancaster passes by, turns over the town centre, and then heads straight for the mic and swoops directly over-head and away. SOTA

17 - a) Still at Bruntingthorpe, EE Lightning F6, XR728, has each engine fired up ready for action.
- b) XR728 howls and roars like only a Lightning can.
18 - At the Shackerstone Family Festival, 3rd September 2011. The BBMF Spitfire and Lancaster (Hurricane unavailable) arrive, and split up to begin their display. Sit back and enjoy this full length display. Towards the end, the two aircraft get back into formation and almost fade into the distance. Then they turn and make a final pass over the festival area, and in the distance the whistles of steam rollers and traction engines can be heard, before the aircraft roar passed and off into the distance (see front cover upper photo). SOTA 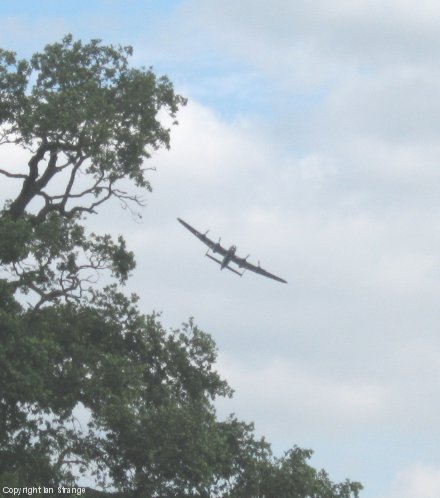 19 - At the 1991 Leicester Airshow in the ‘peace’ of the countryside. Vulcan XH558 sneaks up very quietly, (looking very sinister coming directly towards us) whistles, howls, and roars passed almost ripping the air apart. Then more brief blasts and howls to keep your attention! Recorded about half a mile east of the runway at Stoughton.
20 - Shortly after the above recording, the Vulcan swoops over the runway one last time, howls and roars passed, turns to the left, and then blasts in a steep climb and vanishes through the haze.

Return to the Aircraft CDs page.