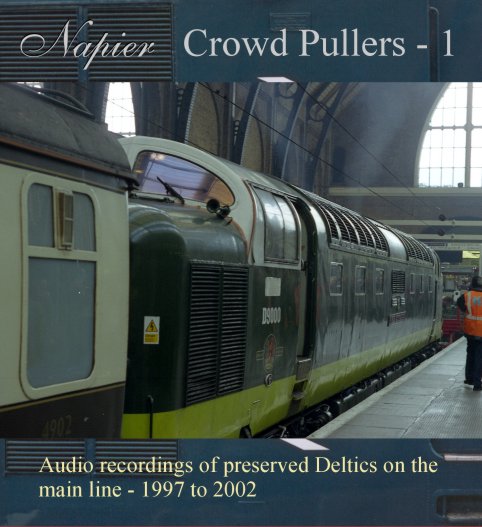 Stereo recordings of preserved Deltics on the main line during 1997 to 2002.

You can download a pdf version of the playlist:
Napier Crowd Pullers - 1 playlist PDF

Inside Standedge Tunnel riding behind D9000.

1* After an unscheduled stop at Watford Junction, D9000 departs and enters Watford Tunnel. The engine note dips a few times as its field-diversion is reluctant to hold. The power surges has the sound recordist rocking to and fro! 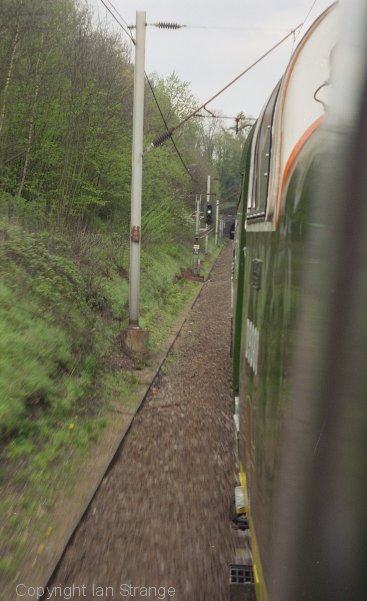 2* D9000 passes slowly through Coventry at 1339hrs before accelerating again.

3a To mark 100 years since the death of Pullman, VSOE ran a tour to his birth town, Bradford. It is heard here calling at Peterborough for a crew change (after nightfall), on the return leg heading for London Victoria. It arrives at platform 3 behind D9000, heard from platform 2.
3b D9000 departs and roars into the distance.

4 D9000 stands at the buffer-stops at Liverpool Lime Street and is prepared for uncoupling.
5* D9000 passes through Stalybridge station and then blasts through the tunnel.
6* D9000 enters Scour Tunnel and gets some wheel-slip.
7* D9000 negotiates the junctions after a brief pause in Leeds station. The sounds echo nicely off walls and buildings before the Deltic is opened up fully.

8 On a Virgin service normally electric hauled (class 86), D9000 is given the chance to tackle this working from Birmingham NS to Glasgow and have its mainline certificate raised from 90 to 100mph. At Stafford just after sunrise, Alan Bun-Clark at the controls makes a smooth, but swift departure, at 0728hrs. 37705 is idling on a nuclear flasks train. 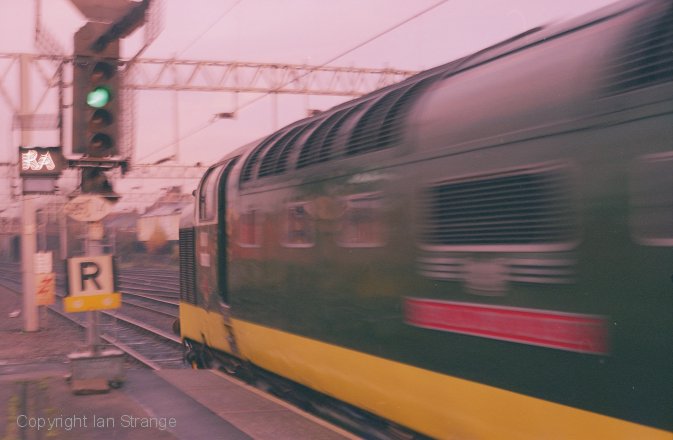 9 After being held at a signal north of the station, in a queue of EMUs (one was delayed in the station for about an hour), D9000 crosses to the slow-line and accelerates passed. It is raining lightly, and there's a blustery north wind. A class 86 hauled railtour shoots passed northbound and then a fire-engine starts up its siren. The Deltic can be faintly heard.

10* D9000 accelerates away from Factory Junction as we skirt around London and head towards Brixton.

11 D9000 arrives at Rugby, platform 1, at 2313hrs. The engine revs drop as the ETH is switched off.
12 After running round the stock, D9000 idles at the south end of platform 1. By chance, another pioneer member of a loco class turned up, also in green livery: Pioneer class 37, with its original number D6700, was on a ballast train and arrived from the north at the opposite side of the station. It is heard easing forwards and passing behind the mic along a goods loop, at around 2340hrs. Points are heard changing to set the route for the Deltic.
13 At 2351hrs, D9000 departs south with the empty stock from the railtour.

14 DPS Deltics D9009 and 55019 were undergoing test runs ready for main line use. They were parked in one of the centre roads, coupled together, at 1208hrs, as the two crews are heard climbing aboard. Both locos have an engine started up almost in unison, and then 55019 tows D9009 away towards the depot. 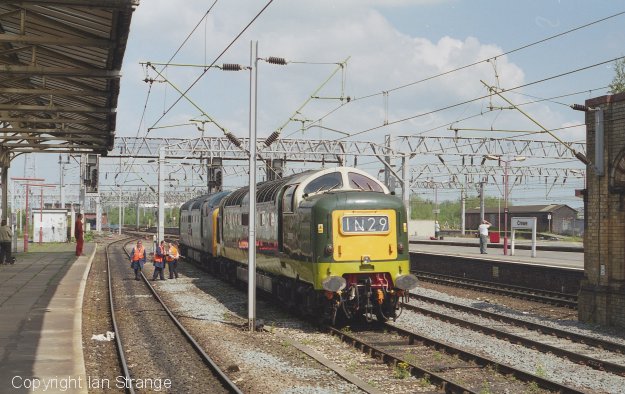 15 For 55019's main line debut, a clear run was arranged to attempt to set a Deltic record from Kings Cross to York. Driver Nigel Hutchison is at the controls as Deltic 19 shoots through northbound at 100mph on its way to the record time.

16 D9000 had arrived 47 minutes early on a railtour from Crewe. At around 1045hrs, it is heard with both engines idling, at platform 6, and then no.1 engine is shut down (see cover photo).

17 In very cold weather at Sandy station, enthusiasts wait excitedly, as we hear D9000 roaring towards us in the distance on the slow line, tooting its horns. A humming from the power lines indicates a class 91 is catching up on the down-fast. The Deltic's power is shut off as it is signal-checked. The class 91's horns are heard. D9000 emerges from the mist and coasts through northwards at 1032hrs and the class 91 tears passed. 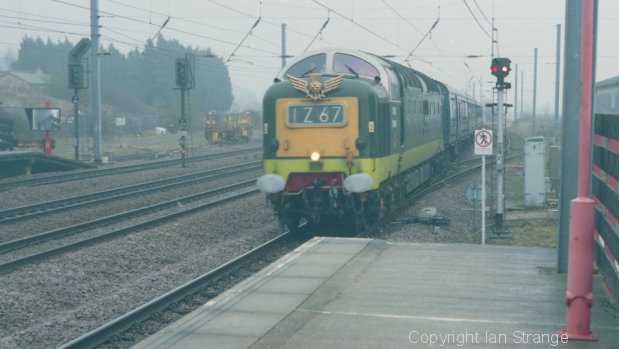 18 A little later (1128hrs) at Peterborough. After running round the stock in Peterborough West Yard, D9000 brings the tour southwards through the station, platform 4, just prior to joining the Nene Valley Railway.

19 After some steam haulage, D9000 brings the return leg of this tour back towards Kings Cross, passing Great Ponton at speed, at 1923hrs.

11th August 2002. New rules from Network Rail meant that service train work for preserved diesels had to be arranged and publicised well in advance. The last such run for D9000 was with Anglia Railways on a Sunday 1030hrs service from Liverpool Street to Norwich. This was normally class 86 electric hauled, consisting of 11 air-con coaches (full ETH load from loco). An excellent Deltic driver was brought in: Nigel Hutchison.

20* At 1039hrs, (6 minutes after departing London Liverpool Street), D9000 gives a burst of full power.
21* D9000 departs Diss, on the outward run, at 1215hrs. It is heard from the rear of the leading coach, but the acoustics of this route are superb, and it sounds much closer! It is easy to hear when the second engine picks up.
22 At Norwich, D9000 runs light out of the station.
23* Heard from onboard the front of the leading coach, D9000 backs gently onto our train prior to the return leg.
24* D9000 departs Diss on our way back south.
25* After being held at the junction just north of Shenfield, we pull away at 1540hrs. As we enter the station, D9000's second engine opens up, leaving some startled expressions among staff and passengers on the platform! 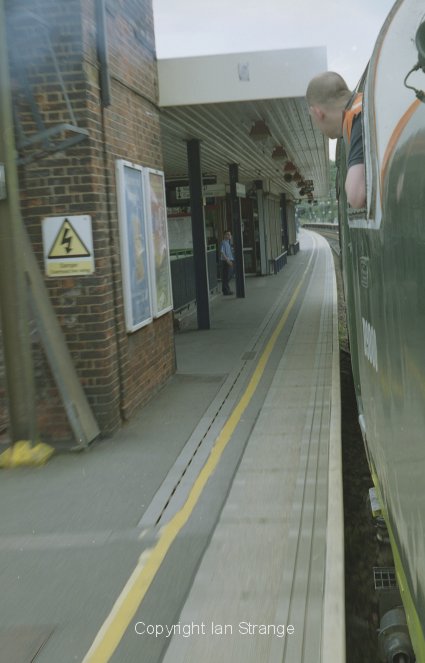 26* The guard kindly allowed several of us to stay in the 1st class front vestibule. Running into north London, we were signal checked almost to a stand at a junction. This is initially recorded from deep inside the front vestibule while I gave a young gent a chance to show his little boy the signals, junction, and some Deltic magic! We accelerate swiftly once the signals clear.

27* Heard from the secondman's seat in the front cab of D9009, as we stand at platform 5, Peterborough. Driver Nigel Hutchison arrives with a cup of tea, and we depart at 0946hrs taking the slow line. 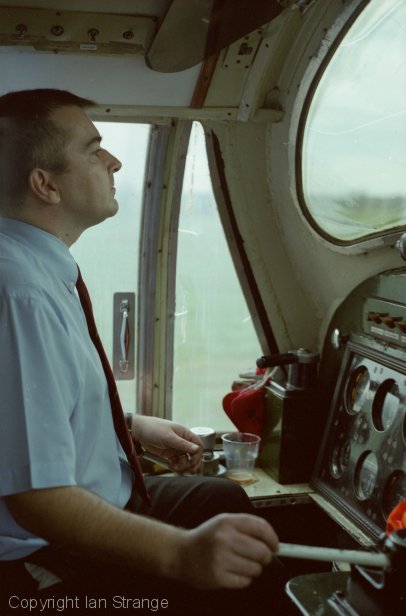 28 At York, D9009 runs light out of the station after uncoupling from the railtour.
29 At Scarborough after nightfall, with a light drizzle falling. After re-fuelling, D9009 propels the empty coaching stock of the tour out of the station.

30* At Manchester Victoria, after a driver change, we depart towards Leeds at 1623hrs. After crossing some junctions and coming up to Miles Platting Bank, the second engine picks up and triggers an over-load cut-out (not wheel-slip). Speed drops before power is regained and we slowly climb the 1 in 59 gradient, steepening to 1 in 47. The driver does not quite take it back to full power, and we settle down to a steady speed of around 15mph. The front vestibule was crowded!
31* We approach and enter the 3 mile long Standedge Tunnel with D9000 at full power. Power is shut off and brakes applied for the speed limit.