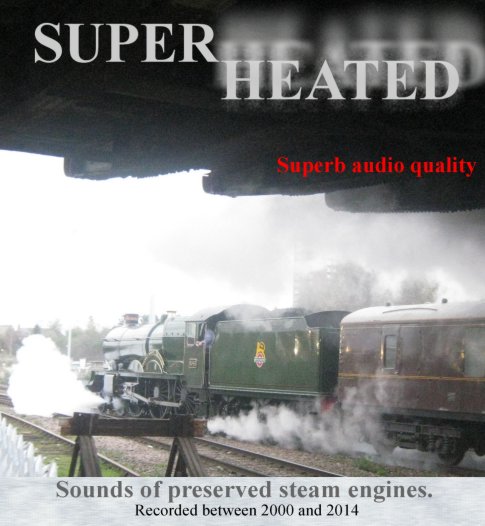 Classic steam engine recordings, both on the main line and the preserved Great Central Railway.

State-of-the-art recording quality except tracks 1, 3 and 6 made on digital mini-disc.

Highlights include:
** "Princess Elizabeth" storming the Lickey Incline, banked by 9600 and 7752.
** 9F accelerating out of Quorn and Woodhouse.
** A Castle class blasts out of Leicester (see CD cover photo).

You can download a pdf version of the playlist:
Super Heated playlist PDF 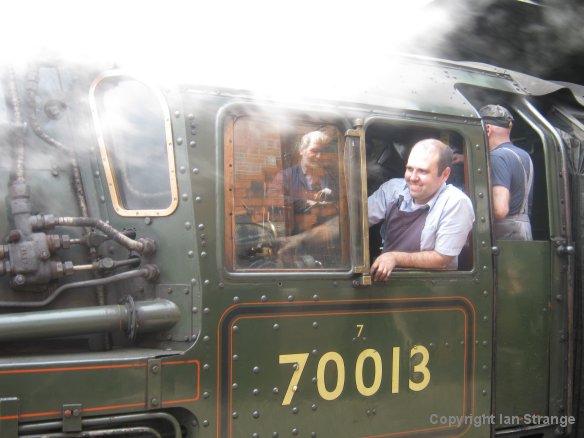 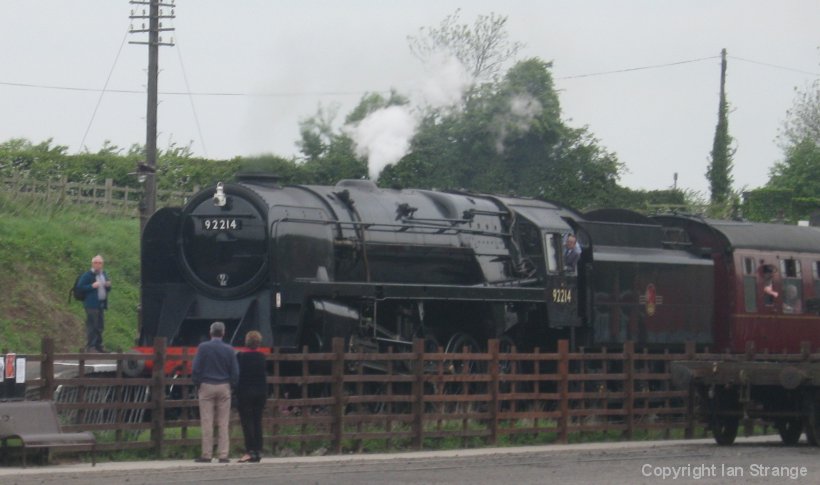 Leicester:
4 - (ed) Announcement for a railtour as a helicopter passes over. 5029 "Nunney Castle" arrives at 1939hrs (platform 2), on a test train/circular tour (fish & chips special) from Tyseley to Tyseley via Burton (run by "Vintage Trains"). 25th June 2013.
5 - 5029 whistles and departs at 1949hrs. Power is eased off ready for a water stop at Humberstone Road loop. 25th June 2013.
6 - 6233 “Duchess of Sutherland” makes a storming departure, running somewhat late, setting off on a railtour to York, at 0917hrs. Class 57 diesel no.57601 idles at the rear providing electric train supply. As 6233 powers into the distance, water rains down onto the gathered photographers (and recordist!). 4th October 2004. 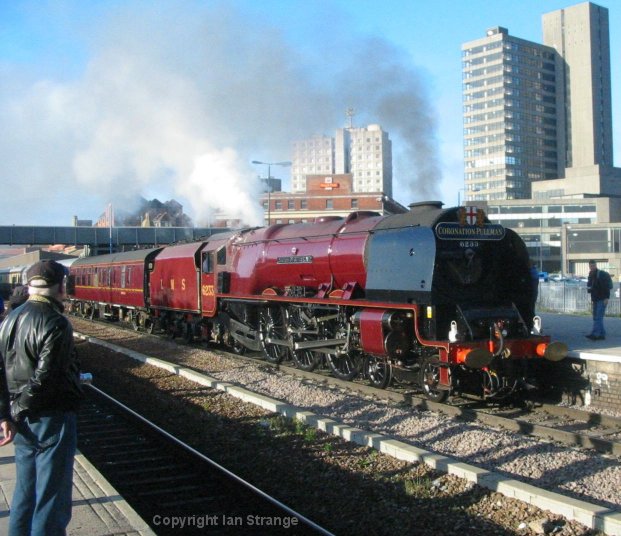 Great Central Railway at a bridleway bridge south of Rothley – 12th April 2008:
7 - 48308 departs Rothley in the distance at 1951hrs to a background of spring bird-song, as the sun sets. As 48308 approaches in the cutting, there is a glow of sparks from under the firebox before it passes underneath on its way to Leicester North.

Cossington (north of Syston Junction) - 7th May 2011:
9 - With rain falling, 70013 “Oliver Cromwell” can be faintly heard accelerating away from Syston Junction along the slow line. The sound is briefly interrupted by a northbound sprinter on the main line and then an airliner rumbling passed. Finally, the railtour ("The Yorkshireman", on its way to York) passes by just after 0840hrs. 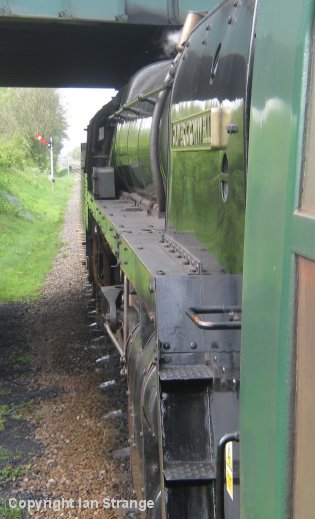 Cossington (north of Syston) - 14th April 2013:
13 - 34067 "Tangmere" passes north on the slow line on "The Peak Forester" railtour from Kings Cross to Rowsley, at 1245hrs. Weather conditions were very windy (blustery gale from the west). Tour run by the Railway Touring Company.

Leicester station - 4th April 2014:
14 - At 1857, an HST stands at platform 3 on a St. Pancras service, as 5043 "Earl of Mount Edgcumbe" arrives on Vintage Trains' railtour "The Spaghetti Western" (but carrying the headboard "The Italian Job").
15 - a) 5043 whistles to get passengers back onboard the railtour.
b) 5043 whistles and departs on its Tyseley to Tyseley (via Burton) railtour, at 1906hrs, creating a wonderful racket as it passes under Swain Street bridge (see front cover photo).

Duffield, by Parish Church to the south of the town - 19th April 2014:
18 - a) "Duchess of Sutherland" accelerates away from Derby in the distance, on a Leicester to Newcastle tour, "The North Eastern" (PMR Tours).
b) Having eased off slightly, the tour passes by at 0735hrs. 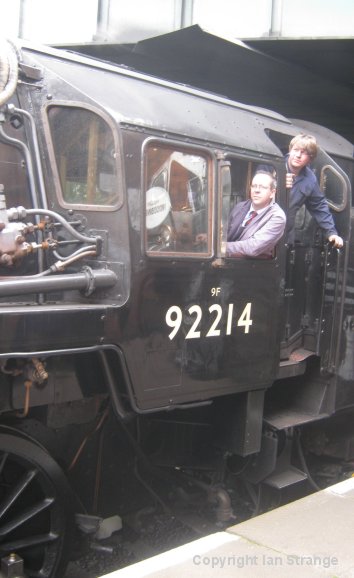 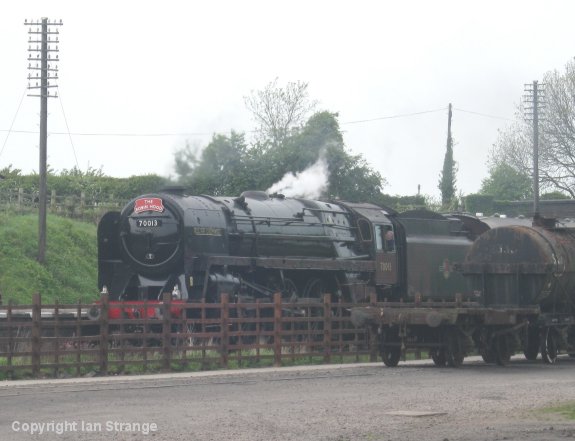 Lickey Incline near Burcot - 24th March 2012:
24 - 7752/9600 Pannier Tank banking engines run light downhill at 1623hrs.
25 - Whistles sound in the distance as 46201, banked by 9600/7752, pull away from Bromsgrove and tackle the 1 in 37 gradient on Vintage Trains Limited "The Double Lickey Banker", from Bristol to Solihull. Spring birdsong, lambs and a distance peacock, add to the atmosphere. A sprinter coasts by down the hill. The tour blasts by at 1712hrs, with “Princess Elizabeth” working hard making an unbelievably loud racket, quickly replaced by the banking engines trying hard to keep up! In summer-like conditions, the sound carries beautifully. You can hear the leading loco accelerate as it passes over the summit. I couldn't get any photos, because I concentrated on getting the best recording possible. 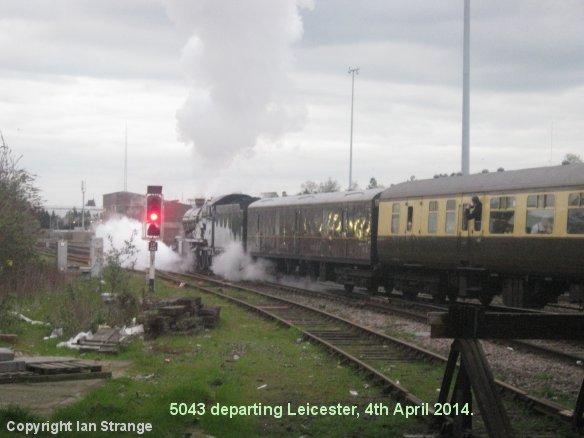 (ed) denotes recording edited down from a lengthy original.