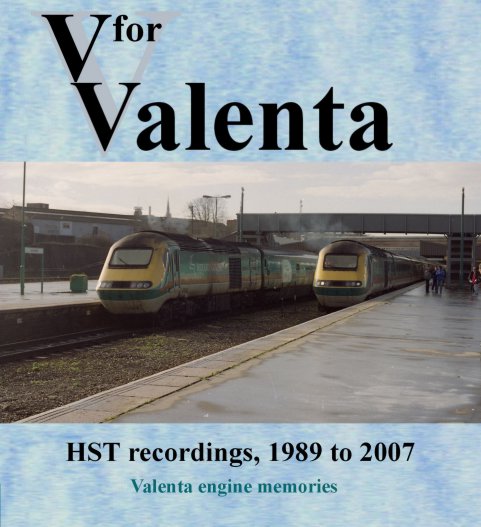 HST sound recordings before they were re-engined.

Produced from hi-fi stereo tape and digital mini-disc original recordings Recorded during 1989 to 2007.

Breath-taking high-speed run-pasts, long approaches in the night, and station departures. On the ECML, WCML, and in and around Leicester, plus other locations.

A couple of welcome interlopers into these recordings are preserved 40145 and a class 86.

You can download a pdf version of the playlist:
V for Valenta playlist PDF

Kilby Bridge, Leicestershire:
1 - An HST sounds a warning to a farm crossing and passes by, picking up speed from a stop at Leicester, bound for St. Pancras. 31-3-89.
2 - With the sun setting behind it, another up service shoots by. 14-4-89.

Loughborough, 7-9-02:
29 - A northbound HST sounds warnings and cruises through at around 100mph in the early evening. A steam whistle is heard from Loughborough Central.
30 - a) The rear power car of an up service is heard idling, and its cooling fan switches on for about a minute.
- b) The above HST begins to pull away under the power of the leading unit, before the rear one revs up too.

31 - South of Newton Harcourt, Leicestershire, heard from the canal. At dusk on a fine spring evening, an HST on a down service is heard revving briefly, and then opening up and sweeping passed. This was just after 1900hrs, the HST being stuck behind a class 47 hauled service train. 27-3-02.
32 - North of Little Bytham on a cold and blustery afternoon. An HST flashes passed, its sound interrupted by a southbound class 91. The HST is heard climbing up towards Stoke Summit, the sound carried by the wind. As it fades, a tractor is heard on a nearby road, and the throbbing of an approaching class 40, 40145 on the down slow. This was a CFPS railtour, and is heard going into the distance. 21-1-05.
33 - North of Tallington on a cold night with the moon glowing through the clouds. A southbound HST eases off as it approaches but opens up and flashes passed. 22-1-05.

Holme Fen, south of Peterborough, 8-10-07:
34 - A jet fighter heads west, as an HST approaches from the north and passes by, as the evening light fades.
35 - A few minutes later, another HST heads south.