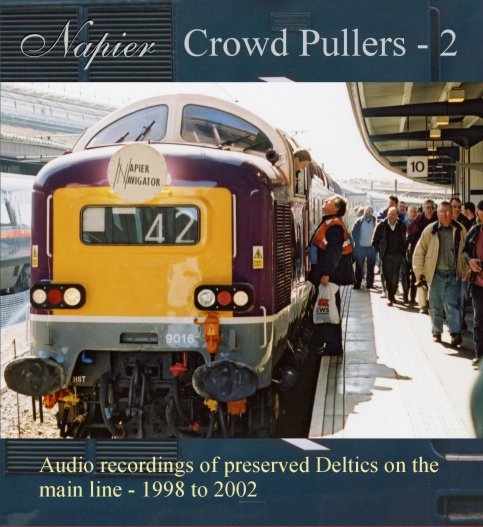 Stereo recordings of preserved Deltics on the main line during 1998 to 2002.

You can download a pdf version of the playlist:
Napier Crowd Pullers - 2 playlist PDF

Virgin Trains’ services between Birmingham and Ramsgate, with D9000, in 1998

1* 18th July. While negotiating south London, D9000 accelerates away from a signal-check at Herne Hill (at 0959hrs) and passes through Sydenham Hill station immediately followed by Penge Tunnel.
2* 18th July. D9000 arrives at Bromley South, the door-locks releasing as soon as we stop.
3* 18th July. D9000 departs Bromley South at 1012hrs. The acoustics vary as the Deltic's sound bounces off walls and buildings.
4a 8th August. As a class 86 departs in the background, D9000 arrives on its way back from Ramsgate. It's announced as an Edinburgh service, but the Deltic will only go as far as Birmingham New Street.
4b D9000 departs gently. In the cab, Chris Wayman spots me and sounds the horns.

Virgin Trains’ service diverted from the WCML to the Settle and Carlisle line, with D9000 taking it from Carlisle to Preston - 27th February 1999

5* D9000 slows and stops at a man with a red flag. A signal cable had snapped. We proceed, passing through Appleby station at 0959hours.
6* At 1034hrs, D9000 passes through Dent and comes onto a stretch of jointed rails. The old problem of "roaring rails" is evident at times.
7* D9000 passes slowly through a tunnel and then arrives at Blackburn.
8* D9000 accelerates from a signal-check somewhere between Blackburn and Preston. The sound of the jointed rails gives some idea of our high speed.

9* D9000 brakes to 10mph on the steeply descending link to the Great Western main line at Acton. Then we accelerate through Acton Main Line station and overtake a freight train – the sound bouncing off the individual wagons.
10* In D9000's front cab. We were signal-checked at Didcot junction at 1502hrs, but the signal ahead clears and we accelerate towards Oxford.
11* Still in the cab, we have departed Oxford but the AWS horn sounds as we approach a signal at yellow. We accelerate briefly. A traction inspector was seated in the secondman's seat, and calls out "Green" as he sights the next signal around a slight left-hand curve and the Deltic is opened up. We pass a class 47 hauled Virgin service.

12 Black 5 no.45407 arrives at platform 12 with the empty Regency Rail stock for a luxury railtour, with D9009 idling at the rear of the train.
13 D9009 draws the train forwards a few yards before shutting down each engine in turn.

14 As an HST stands over at platform 2, D9000 arrives at platform 3 from Lincoln, on the return leg of the tour, after nightfall. The HST departs.
15 D9000 departs at 1915hrs for Stratford-upon-Avon and Shirley.

16a D9000 arrives from Stratford-upon-Avon in very damp weather.
16b D9000 departs smartly at 1022hrs, easing off over the junction before opening up in the distance. Its destination was York. 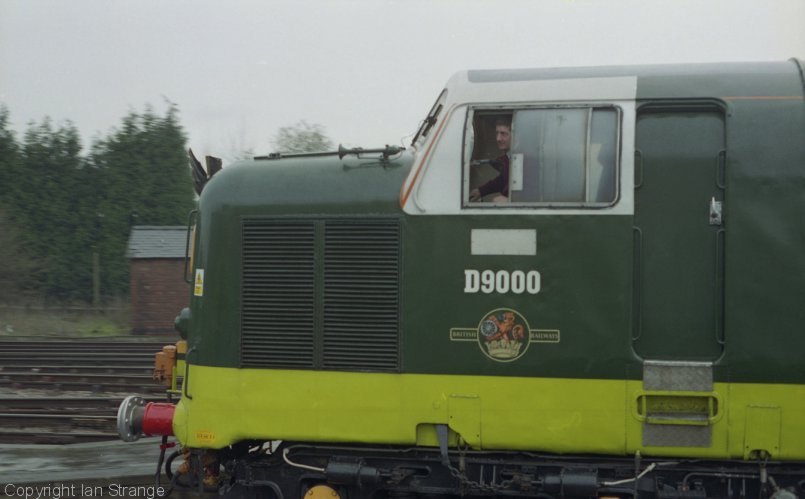 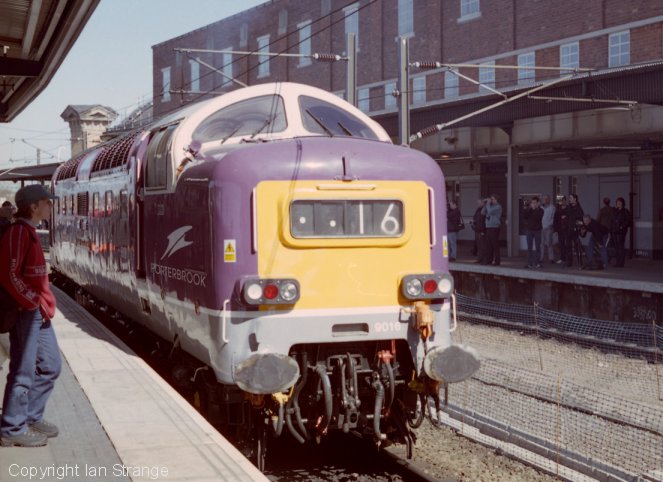 22b 9016 runs light out of the north end of the station.
23 Later that day (1806hrs), 9016 arrives with the tour from Scarborough under the main station canopy, at what used to be platform 8 in the old days. Very nostalgic!

24* After departing Leamington Spa, at 1617hrs, D9000 accelerates down the single track towards Coventry. The front vestibule was crowded on what was the penultimate working for Virgin. The voice of Chris Wayman is heard shouting to me from the rear cab, inviting me to join him at Coventry. (When I subsequently alighted at Coventry, one of the enthusiasts was surprised, and said "Are you jumpin'?". "No. I'm going in the Deltic cab". He was speechless!).
25* In D9000's rear cab at Coventry. As well as Chris, there were 2 Virgin Trains staff perched on the seats. One was describing how loud it was in the engine room. Recorded from the centre of the cab, we make a lively departure. Chris then takes the traction inspector into the engine room. Note how loud it is with the door open! We pass an oncoming service, and then go through Beechwood Tunnel and then pass another train.