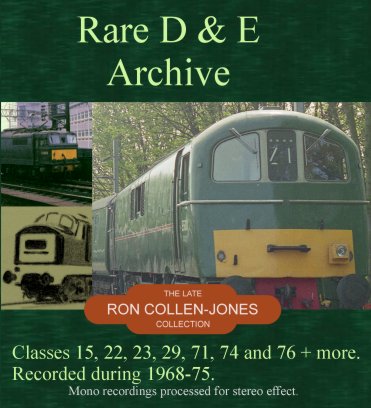 Recordings originally made in mono by the late Ron Collen-Jones, they now have a pseudo-stereo effect added by the publisher, Ian Strange.

Highlights include:
** A ride behind class 29 on a Mallaig service.
** Class 71s on the Golden Arrow.
** Baby Deltic and big Deltic on the same recording.

You can download a pdf version of the playlist:
Rare D and E Archive playlist PDF

Travelling on the 1635 Glasgow Queen Street to Mallaig, 16th January 1969 (the day the Waveley Route closed):

3 - Riding onboard M28587 departing Manchester Oxford Road on the 1110 to Altringham. We call at Deansgate and then accelerate very rapidly. Late 1969.
4 - Onboard M28587 arriving and departing Warwick Road. Late 1969.
5 - At Timperley station, M28593 arrives and departs, as an airliner takes off in the background. Late 1969.
6 - This time on 16th April 1969, onboard a service departing Deansgate on the 1130 Manchester Oxford Road to Altringham. We do an emergency stop, as the driver thought he had passed a signal at danger. But the signal was not in use!

7 - Onboard behind class 76 no. E26055 "Prometheus" as we depart Manchester Piccadilly on the 1310 to Sheffield Victoria. Trailing load 165 tons tare (5 coaches).
8 - The very quiet 76 departs Dinting with its light load (onboard).
9 - Horns blast and we enter Woodhead Tunnel at speed on the jointed rails.

Outside Holloway up south box, just north of Copenhagen Tunnel, 11th September 1970. No rare locos here, but an odd situation due to several Deltics being in works following the transition of engine overhauls from Napier to BR Doncaster. This resulted in other locos appearing on premier services. On this day, services were being severely checked at Holloway. I left in some of Ron's comments as they are informative:

10a - A bell strikes 10am. A squeak of brakes in the distance, is a class 47 stopping at a signal. The lever in the box is thrown and the 47 (no. 1512) accelerates towards us and coasts into the tunnel on an up service (1A02). A young spotter comes up and discusses the latest loco movements with Ron. They go quiet when they hear the roar of Deltic 9018 "Ballymoss" approaching on an up service, easing off and passing by. A two-tone siren gives a touch of period nostalgia.
10b - The Peak-hauled Flying Scotsman stops in the background, held at a signal. A local down service passes, consisting of 2 Cravens car sets. The spotter returns, evidently preferring to see Deltics in action, as the unidentified Peak pulls away and accelerates passed, only to be over-taken by a Cravens DMU (3 sets).

The recording quality of the next sequence is rather poor (although I've enhanced it as much as I can), but it is extremely rare. Featuring pioneer Baby Deltic D5900, we still get the full sense of how loud it was, almost drowning out rail-joint sounds - and everything else!

12 - Riding behind D5900 departing Kings Cross on the 0830 to Baldock. The Baby Deltic opens up inside Gasworks Tunnel, is signal-checked slightly, and then powers through Copenhagen Tunnel. We get signal-checked again, accelerate, and then arrive at Finsbury Park.
13 - D5900 makes a brisk departure from Finsbury Park, and makes the short sprint to Wood Green. Ron calls out 4472 (Flying Scotsman) spotted at Ferme Park. August 1968.

14 - Again, poor quality sound, so I've kept this brief, just to give an insight into what one of the southern region electric prototypes sounded like. No. 20002 3rd rail electric loco, departs.

15 - On-board the 1245 Paddington to Bristol, behind D0280, as we depart Reading. I've kept the recording short, just to satisfy any curiosity of what this loco sounded like. It was hauling 11 coaches including 4 of the XP64 stock.

The final day of public rides on the Longmoor Military Railway, 3rd July 1969, which closed later that year:

16 - At Longmoor crossing, AD610 "General Lord Robinson" passes on the 1545 Longmoor to Liss.
17 - An announcement for the final service is made, as diesel loco no. AD610 is heard. This diesel resembles a Clayton, with its central cab position. Steam loco no. 600 "Gordon" then backs onto the final service for Liss.

On the London Underground System:

24 - Stratford (north London), April 1970. Someone cries out in excitement as he sees class 15 no. 8229 approach. Unfortunately he insists on talking to Ron about it as the recording progresses!
25 - London Liverpool Street, 30th December 1970. As a class 47 no. 1528 (ex-works condition) idles awaiting departure, a class 15 no. 8234 propels some coaching stock out of the station.

28a - Riding behind E5007 as we ease out of London Victoria on the 1030 Golden Arrow, and we hear the distinctive chime whistle.
28b - Some enthusiastic whistling as we plunge into Penge Tunnel.
29a - Running briskly along the (mostly) jointed track, E5007 passes through Kent House.
29b - Still bowling along, more whistling as we pass Bromley South.

Kilburn, WCML, a few days after a serious crash. Electric services were being dragged by diesel locos between Euston and Watford Junction. Early February 1975:

35a - Riding behind class 50 no. 408, as we accelerate on the 0925 Crewe-Carlisle, after a pw restriction at Leyland. Ron calls out the numbers as we pass a couple of class 40s, 385 and then 314. We come to a halt at a signal.
35b - We are flagged away after stopping at a red flag near Oxenholme. 408 is now running wrong line. A sliding door inside our carriage slams. 408 accelerates gently under caution.

37 - Baby Deltic no. 5905, is held at a signal on 4B26 on the up-slow. 5905 then pulls away gently. With a background of fireworks noises, the Baby Deltic fades as an unidentified big Deltic emerges, roars passed on 1A31 (up service), then eases off. A signal returns to danger. I left in some comments by Ron, to avoid losing the 'flow' of the recording.