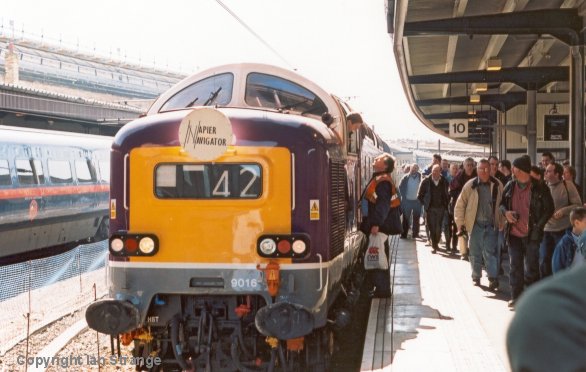 In April 2002, Gordon Highlander made its main line debut railtour, over 20 years since its BR retirement. In its alarming purple and grey livery it turned heads even more than usual along its travels. I got myself a 1st class ticket (not bad for Ł34.50!), but first class was at the rear for the entire trip. That suited me fine, because I like to get on-train recordings in the morning, before the beer has started to flow and the punters become a tad lively. I also wanted to get the historic moment as we set off from Crewe. 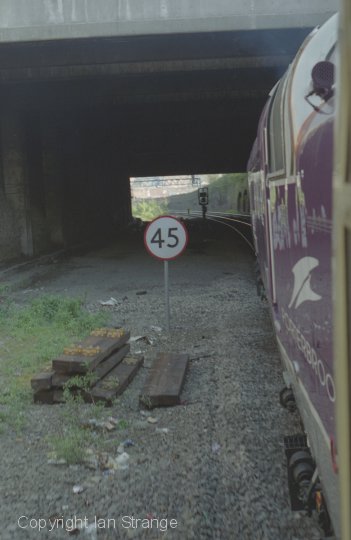 The destination was York and Scarborough taking the scenic route via Kidsgrove, Walsall and Derby. I stood at the front droplight window for most of the outward trip, sharing it with a variety of happy enthusiasts. Having had one of its engines repaired, it was down on power from one engine, although 90+ mph was attained. I noticed that although the exhausts were almost silent (as with other overhauled Deltics), the air-intakes were louder than normal, providing an even louder deep drone. Also the deep throbbing in stations was louder than ever and almost over-whelming. No complaint there!

It was fun to bowl along in the sunny, cool weather, and see heads turn in towns, villages and stations, as folk wondered what this amazing sound was approaching. It was the Purple Monster!

I bailed out at York. For the return trip, I was happy to relax at the rear of the train back to Crewe as the light faded. Late night at Crewe produced my best recording of the day. With few people around after 11pm, and a 37 standing in the background, 9016 propelled the empty stock with a resounding roar within the cathedral-like accoustics of that station. You can hear that roar on Good Pulsations Volume 8 and also on Hellfire!

Cab-class travel - In the sharp end

One of the best Deltic drivers since the main line returns, was also a customer. He appreciated my recordings of his exploits, and I appreciated his driving skills and enthusiasm. There was the possibility of recording in the front cab for a tour in December 2002. This was one of the "Scarborough Flyer" tours, largely for non-enthusiasts, with full dining. Some extra standard class coaches were included for the enthusiasts. D9000 was booked for this, but when this had to cease main line running, D9009 "Alycidon" substituted. Having already had D9000 cab rides, this was an added bonus. To get a cab ride out of "the Cross", would be a dream.

Kings Cross was in chaos that morning due to engineering works further north, and all platforms were occupied and no indication of where our tour would turn up. When it was allowed in, somewhat late, it did not use the usual long platform, and I was worried that the train would be too long. That is, the Deltic might be off the platform end, precluding me from jumping aboard. Thankfully, this wasn't the case, although it wasn't until after booked departure time that it was confirmed I was going aboard. It was dark and drizzling that morning. We finally got the right-away, but were signal-checked through Gasworks Tunnel. We could see the tail-lights of an EMU on the adjacent line, and it was being routed ahead of us.

By the time we approached Copenhagen Tunnel, we could start to open up. It was dry inside the tunnel, and our driver got the traction current up to about 2,300 and held it there as the rear engine gradually picked up and we were safely on full power. We also had the fast line up to our first stop at Potters Bar. I also had the secondman's seat from then onwards and an open window for each standing start. As we crossed Welwyn Viaduct, we sighted a flashing double-yellow showing that we were being demoted to the slow line, before calling at Stevenage. You can hear these in-cab sounds on Good Pulsations Volume 9. 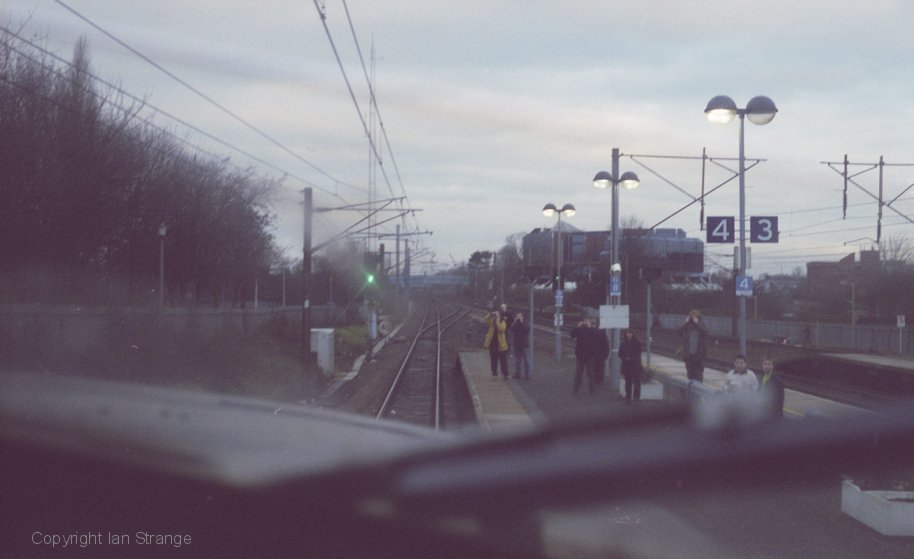 At our Peterborough stop, we were on platform 5. I was able to look down onto the platform, and see the flurry of activity from photographers, and think back to 21 years earlier when I used to visit that station and wonder if we'd ever see these sights again. The notion of being in the cab had not entered my thoughts! It was slow line to a stop at Tallington where a class 91 and then a Eurostar overtook. Then an assault on Stoke Bank on the fast line with speed rising to 75mph, with the 12 coach load. After Stoke Summit, it was easy fast cruising, with our driver giving full power blasts through stations to entertain the enthusiasts watching us speed by. As we approached Newark, we got signal-checked. We had caught up with the Eurostar which had called there!

All too soon we arrived at York, and I enjoyed the rest of the trip in standard class, with a scenic route taken to Scarborough and then a more direct return to London after nightfall. I bailed out at Potters Bar, and thus missed the fun and games at Kings Cross when the station security tried to enforce a photography ban as part of anti-terrorism measures. This incident set off the train of events that the national news covered a few months later!